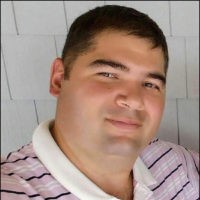 On Monday, December 2, 2019, at approximately 2000hrs., Captain Michael Christopher Malinowski responded to a call of reported downed wires and trees. After returning to the station, he complained to his fellow firefighters that he wasn’t feeling well. The next day, Tuesday, December 3, 2019, while at work, he became ill and was immediately taken to the hospital where he passed away a short time later from an apparent heart attack. 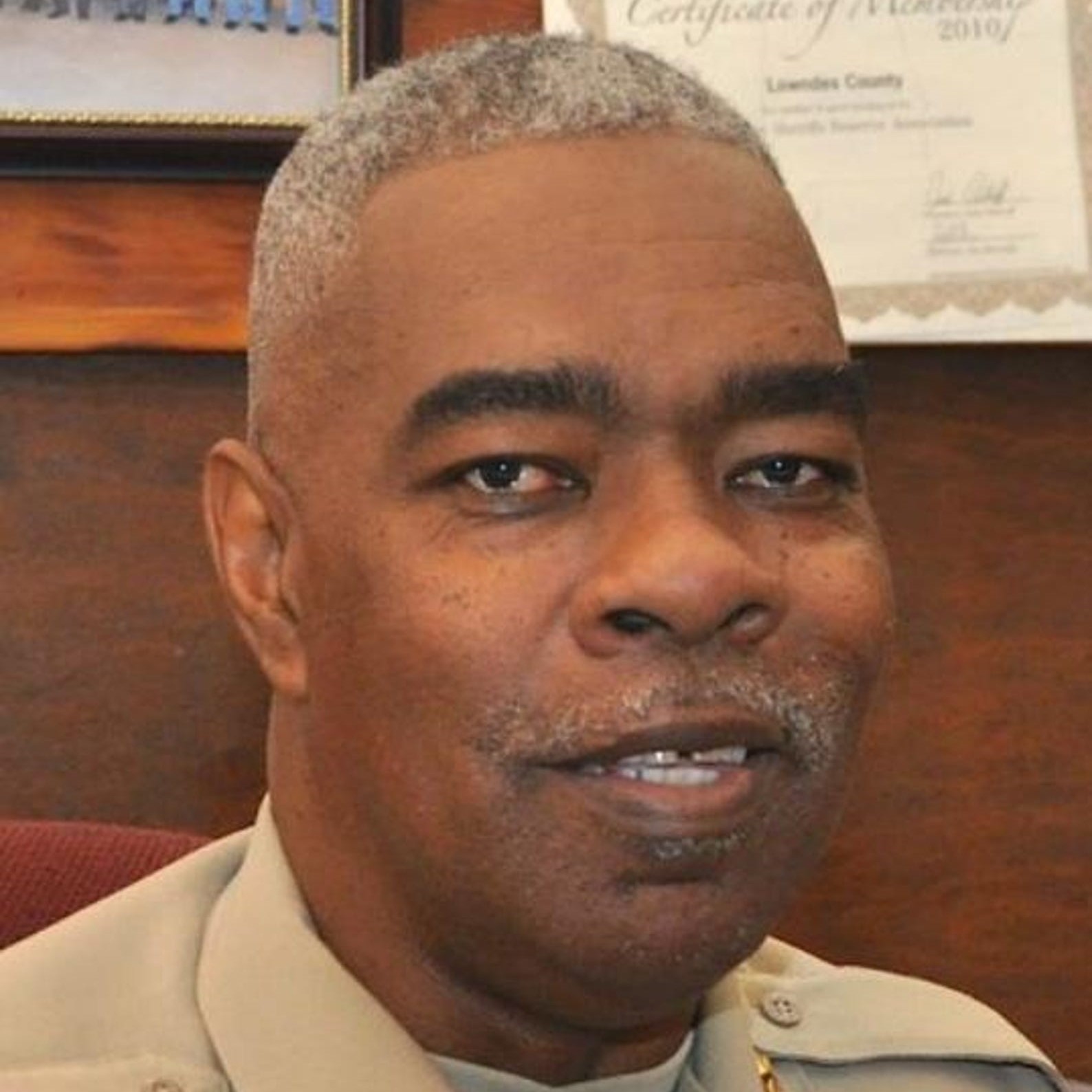 Sheriff John Williams was shot and killed around 8:00 pm while responding to a trespassing and noise complaint call at a gas station convenience store at the intersection of Highways 21 and 97 in Hayneville. He had responded to the store after the owner called to report a large gathering of people in the parking lot who refused to leave. Sheriff Williams arrived at the scene and was speaking with an occupant of a truck about its loud music when the male shot him. The male, the son of a neighboring Montgomery County sheriff's deputy, fled the scene but later returned and turned himself in. The truck was later determined to have been stolen. Sheriff Williams was a U.S. Marine Corps veteran and had served in law enforcement for more than 40 years. He is survived by his wife and children. 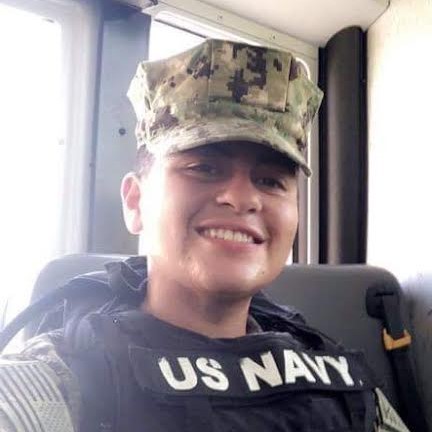 Master-at-Arms 3rd Class Oscar Temores was killed when his patrol car was intentionally struck by a vehicle that had run the gate at Joint Expeditionary Base Little Creek-Fort Story in Virginia Beach, Virginia. The vehicle entered Fort Story at Gate 8 on Atlantic Avenue by driving the wrong way in the outbound lanes at a high rate of speed at 7:35 pm. Personnel at the gate immediately requested assistance and MA3 Temores began to respond to the scene. The civilian driver of the vehicle intentionally struck MA3 Temores’ patrol car head-on responded to locate the vehicle. MA3 Temores was transported to Virginia Beach General Hospital where he died a short time later. The subject, who was also injured, was taken into custody. His motive for entering the base is under investigation. MA3 Temores had served with the U.S. Navy Security Forces for only 10 months. He is survived by his wife and 2-year-old son. 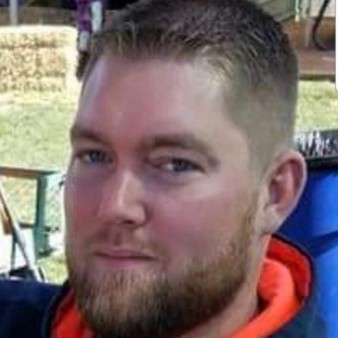 Sergeant Joshua Voth was killed when a boiler exploded at the Fremont Correctional Facility in Cañon City. The explosion occurred at about noon when the boiler suffered a catastrophic failure. Sergeant Voth had served with the Colorado Department of Corrections for three years. He is survived by his wife and three children. 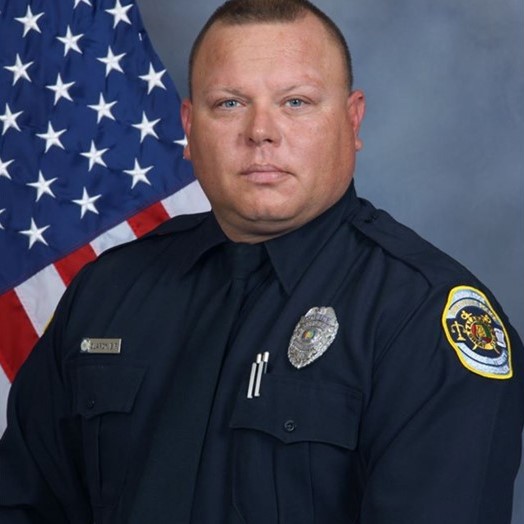 Agent Billy Clardy III was shot and killed while participating in a narcotics operation with the HIDTA Gulf Coast Task Force. The task force was conducting a buy-bust operation at a home on Levert Street, near the intersection of Oakwood Avenue, at 4:00 pm. Agents attempted to take the suspect into custody as the man delivered a large amount of narcotics to the home. The man immediately opened fire, striking Agent Clardy in an area not protected by his vest. The man then fled on foot but was taken into custody after a short foot pursuit. He was charged with capital murder. Agent Clardy was a U.S. Army veteran. He had served with the Huntsville Police Department for 14 years and had previously served with the Limestone County Sheriff’s Office, the Ardmore Police Department, and the Fayetteville, Tennessee, Police Department. He is survived by his wife, five children, two brothers, and his mother. Agent Clardy’s father, Police Officer Billy Clardy, Jr., was also killed in the line of duty while serving with the Huntsville Police Department. Officer Clardy, Jr., was killed in a vehicle crash on May 3rd, 1978. 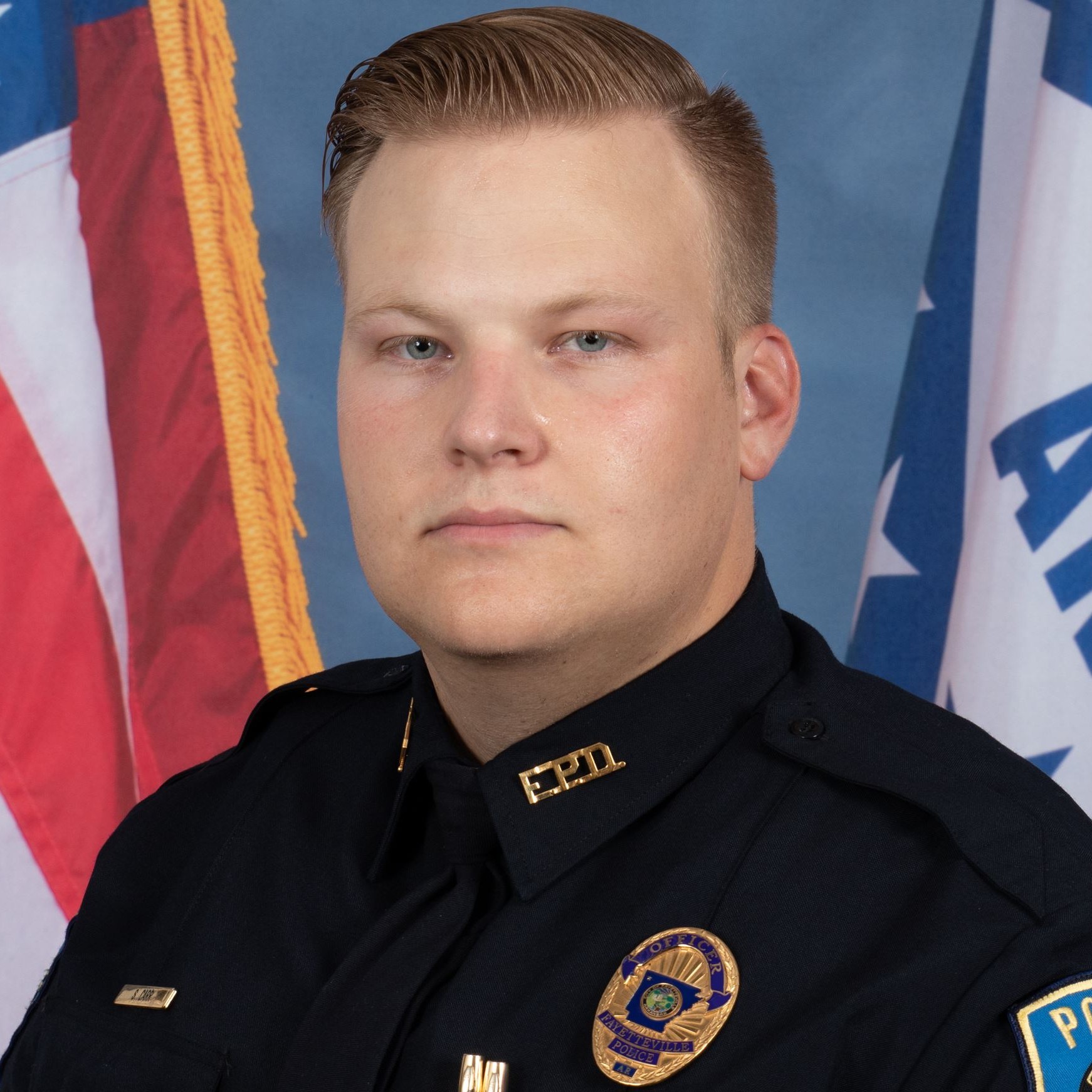 Police Officer Stephen Carr was shot and killed in an unprovoked attack as he sat in his patrol car in the Fayetteville Police Department's rear parking lot at about 9:40 pm. He was waiting for his partner to return from inside of the police station when a subject approached him and opened fire without warning, killing him. Officers inside of the station heard the shots and immediately responded. They pursued the subject into an alley next to the police station and fatally shot him in an exchange of gunfire. Officers and paramedics provided aide to Officer Carr, but he succumbed to his wounds. Officer Carr had served with the Fayetteville Police Department for 2-1/2 years and was assigned to the Bicycle Unit. 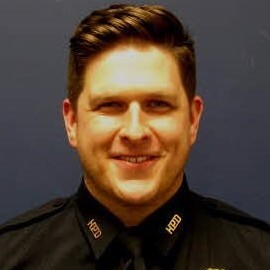 Sergeant Christopher Brewster was shot and killed while responding to a domestic assault at about 6:00 pm. A woman had called 911 and reported that she had been assaulted by her boyfriend and that he was armed with two firearms. When officers arrived at the scene both subjects had already left. Sergeant Brewster was checking the area when he saw the couple walking in the 7400 block of Avenue L. Sergeant Brewster attempted to contact them but was fired upon as he exited his patrol car. Despite being struck in the chest above his vest, he was able to give dispatchers and other officers a description of his wounds and the subject's direction of travel. Sergeant Brewster was transported to Memorial Hermann Hospital where he succumbed to his wounds. The man was arrested by other officers following a foot pursuit. He was subsequently charged with capital murder. Sergeant Brewster had served with the Houston Police Department for nine years. He is survived by his wife, parents, and three sisters. 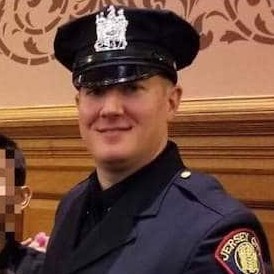 Detective Joseph Seals was shot and killed at 12:30 pm in Bayview Cemetery after encountering two subjects, a man and woman, in a van that was linked to a homicide in Bayonne, New Jersey. During the encounter, Detective Seals was shot in the back of the head. The two subjects then fled in the stolen van and eventually barricaded themselves inside of a kosher grocery store on Martin Luther King Drive. They murdered three people inside of the store and then engaged responding officers in a prolonged shootout for several hours in which two officers were wounded. Both subjects were eventually shot and killed by officers during the shootout. A live pipebomb was later found inside of the van the two had abandoned before entering the store. It is believed the subjects were part of a radical religious movement, held anti-Jewish and anti-law enforcement views, and specifically targeted the kosher grocery store in an act of religious terrorism. Detective Seals had served with the Jersey City Police Department for 13 years and had served in law enforcement for a total of 18 years. He is survived by his wife and five children. 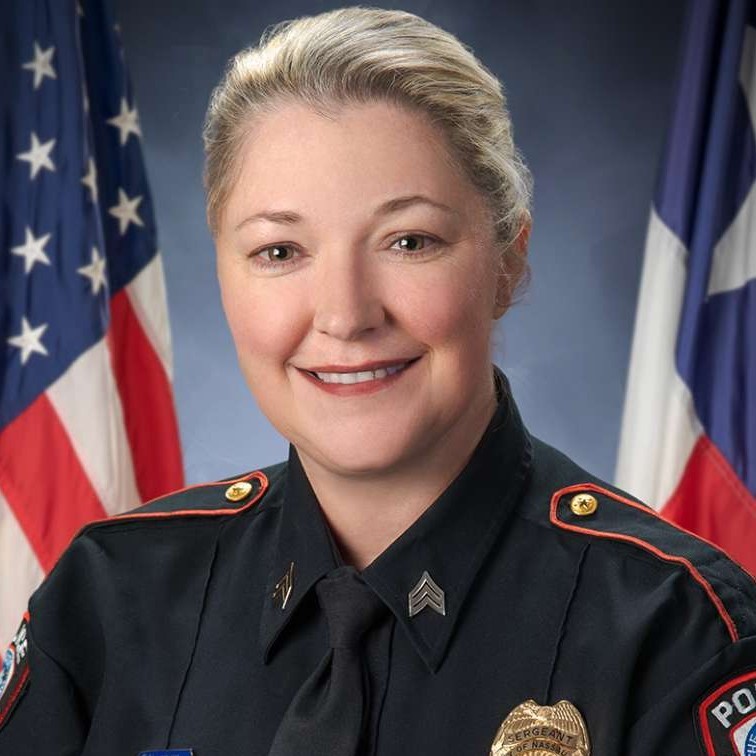 Sergeant Kaila Sullivan was killed when she was intentionally struck by a vehicle driven while attempting to arrest a wanted subject in the 2000 block of San Sebastian Court at 8:30 pm. Officers had conducted a traffic stop on the man who was wanted on a warrant for domestic assault. When they attempted to place him in custody he began to resist and was able to re-enter his vehicle. He struck fatally Sergeant Sullivan as he fled the area in the vehicle. Sergeant Sullivan was transported to HCA Clear Lake Hospital where she succumbed to her injuries. The vehicle was found abandoned a short distance away. The man was arrested on December 12th, 2019. Sergeant Sullivan had served with the Nassau Bay Police Department for 16 years. She is survived by her wife and son. 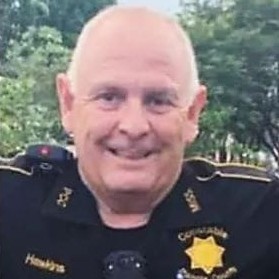 Constable Raye Hawkins was killed when his vehicle was struck by a stolen pickup truck being pursued by other officers at around 2:30 pm. The pursuit started in Tallahatchie County when deputies attempted to stop the stolen vehicle that was occupied by two juvenile offenders. The juveniles lead the deputies on a pursuit that entered Panola County and continued towards Batesville. Constable Hawkins was responding to assist in the pursuit when the vehicle struck his car at a high rate of speed at the intersection of Route 35 and Route 6, causing him to suffer fatal injuries. Both juveniles were taken into custody and charged as adults with felony murder. Constable Hawkins had served in law enforcement for 29 years. His son is a police officer with the Batesville Police Department and was one of the first officers on scene following the crash. 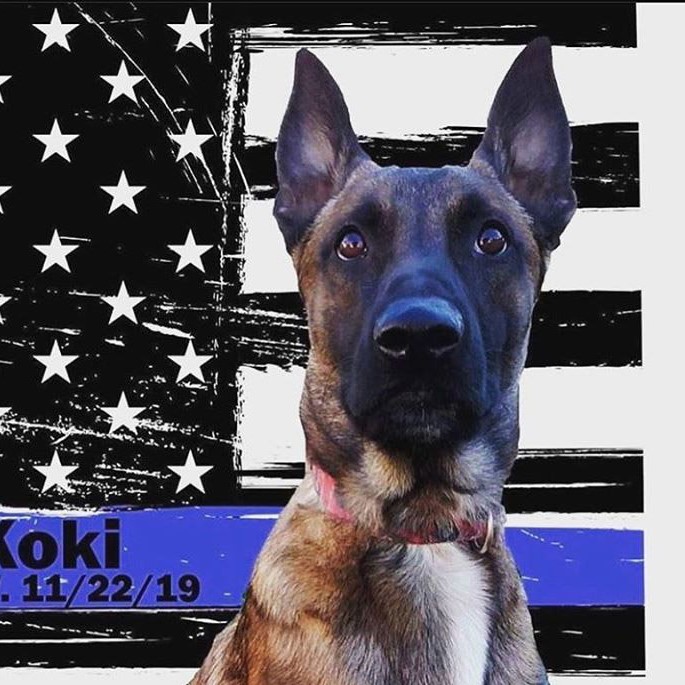 K9 Koki was shot and killed near the intersection of El Mirage Road and Thunderbird Road as officers attempted to apprehend a wanted subject at 5:30 pm. The man fled on foot and opened fire on pursuing officers, killing K9 Koki. The man later committed suicide. K9 Koki had served with the El Mirage Police Department for four years. 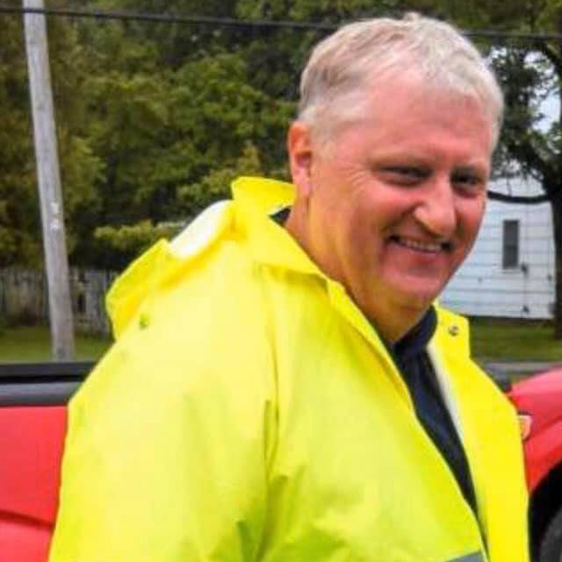 On Thursday, December 5, 2019, at approximately 1930hrs., Chief Robert White responded to a residential structure fire in Potsdam, New York. After arriving at the scene, he collapsed and was immediately taken to the hospital where he passed away. The cause and the nature of death have not yet been determined. 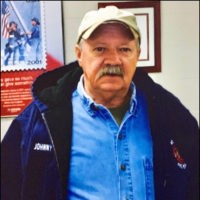 On Wednesday, December 4, 2019, at approximately 1545hrs., Firefighter George “Johnny” Childs responded to a residential structure fire. The next morning, Thursday, December 5, 2019, he was found unresponsive by his personal vehicle outside a local business. He was immediately taken to the hospital where he passed away from cardiac arrest. 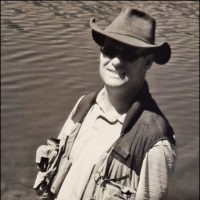 On Saturday, December 7, 2019, at approximately 0200hrs., Firefighter Kenneth Jones responded to a multi-residential structure fire. Jones had climbed to the roof of the five-story building in search of access to the fire when he fell off of the structure. He was immediately transported to the hospital where he passed away.